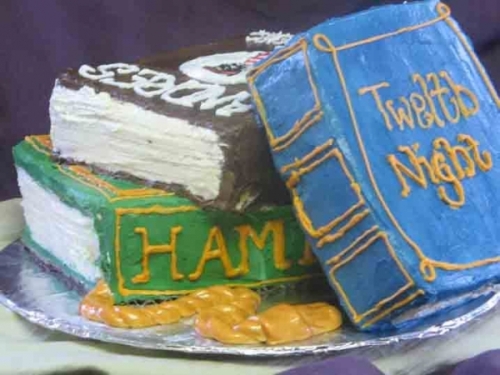 Stacked Books Tassles by ChicosMom, found on www.cakecentral.com. Click the picture to head over there and have a look if you want to look at lots of amazing cakes and lose several hours of your life!

Finally, a new post! I’m afraid the lack of blog posts is not due to me jetting off on some kind of holiday in August, but because I have been trying to write a chapter. The chapter focuses on alcoholic drinks, so aside from the buttered beer I haven’t come across much in my reading that I can write about here. Today, however, I thought I might do a little baking, and I figured that while I was at it I might as well bake something for the blog too. So, I shall be making some early modern cakes, and here you shall find a little bit of background on them. I am still wading through books on alcohol and allegories and trying to pull a chapter together, so I don’t have time to really get into the history of cakes, but here are a few tidbits to whet your appetite before I post the recipe in a few days:

Thou bel amy, thou Pardoner,’ he seyde,
‘Tel us som mirthe or Iapes right anon.’
‘It shall be doon,’ quod he, ‘by seint Ronyon!
But first,’ quod he, ‘heer at this ale-stake
I wol both drinke, and eten of a cake.’

I’ve gone back a little further than usual looking for references with this one. Cakes are mentioned several times in the tales but I’ve gone for this quote from the Pardoner. As characters in the Canterbury Tales go, the Pardoner is one of the least appealing, and his eating and drinking here seems to me to be suggestive of greed.

What did cake mean in the early modern and medieval world? Well, according to the OED it had two  meanings. The first, originating from an earlier time, was “a baked mass of bread or substance of similar kind, distinguished from a loaf or other ordinary bread, either by its form or by its composition”. The cake would be smaller than a loaf of bread, “round, oval, or otherwise regularly shaped, and usually baked hard on both sides by being turned during the process”. I suppose this would be somewhat similar to what you would call a roll, bun or batch today (depending on which part of the country you live in). Anyway, it seems that a cake need not be something sweet, as it usually is today (excepting things like potato cakes, I suppose). Another meaning which ran alongside the first but came to prominence during the 16th and particularly the 17th centuries was that which eventually lead to the modern sense, “fancy bread, and sweetened or flavoured”. Now, of course, we see cake as a different substance to bread – the latter being as a rule risen with yeast and made of flour and water, and the former being made of flour, butter, sugar and eggs (6oz each of the first three and then 3 eggs – or at least that’s what my mother taught me).

It’s also worth mentioning that “cake” could also refer to a type of “thin hard-baked brittle species of oaten-bread” which was eaten in Scotland and the north. In Edward Sharpham’s The Fleire (1607), the titular character says: Send her an Oten cake, t’is a good Northern token”, illustrating this point.

I’ve seen “Court cakebreads” mentioned in a few plays, and I think these might be the “fancy bread” referred to above – court food is, as I’ve discussed before, usually described as being fancy and embellished in some way. Cakebreads seem to go hand in hand with custards, you’ll see they are mentioned in a few of the quotes I used in my post about custard.

Now, I said this wouldn’t be a very long post, so I’ve just got one mention of cake from a play that I thought was interesting. As it happens, there is a copy of this play in the collection I’m studying.

In Richard Brome’s The Late Lancashire Witches, wedding cake, or “bride-cake” has a role to play. At a wedding feast, some revelers wait with the bride cake to “cracke and crumble upon her crowne” – this seems to be some kind of wedding tradition. However, there is a spirit in the house, and he turns the cake to bran, prompting a cry of “the divell of crum is here, but bran; nothing but bran!”. As the play is set in Lancashire, perhaps this is a reference to the “oat-cakes” mentioned earlier? It’s also interesting to see that wedding cakes have apparently been around for a while, though I am glad that they don’t get crumbled on people’s heads anymore. Having said that, there is a growing tradition, mainly in America, I believe, of brides and grooms squashing cake into each other’s faces, so perhaps this is coming back!

And finally, here’s some wisdom from a 16th century book of proverbs:

Wolde ye bothe eate your cake, and haue your cake?

John Heywood, A dialogue conteinyng the nomber in effect of all the prouerbes in the englishe tongue (1546)

Doesn’t it just make so much more sense that way around? I never understood why it was a bad thing to want to have your cake and eat it – surely that’s what you do when you have a cake?! But yes, it would be silly to want to eat it and then have it back again.

Anyway, that’s all for now, I shall be back soon with a recipe for 16th century cakes!

Filed under History and background